Sally Moore, writer, poet and president of the Writers’ Community of Durham Region (WCDR) has nominated me for the Versatile Blogger Award. 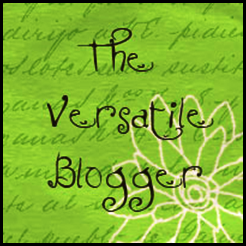 For those who have never heard of this award, bloggers are nominated based on the quality of their writing, the uniqueness of their subjects, and the care they take to display their subject matter. In the words of those who created the award, “Honor those bloggers who bring something special to your life whether every day or only now and then.” I humbly acknowledge the honour, particularly coming from Sally whose blog is a work of art (literally). In fact, she is the type of blogger that this award was created for. For Sally’s blog, click here and see for yourself. Now to fulfil my obligation under this award. I’m required to share seven things about myself, and then nominate 15 other bloggers for the award.

Seven things about me: My first published work was a skit I wrote for my high school play. Yes, I was a playwright before a novelist. I don’t recall the title of the piece—they would have changed it at any rate, but I remember the creation of it. Most schools put on a canned play, but one year, the drama department decided to open it to student submissions for a series of skits. The subject of my submission would not surprise anyone. Fourteen-year old girls have one overriding preoccupation in their lives—the agony of unrequited love. I remember clutching a Kleenex box while scribbling my emotions onto a ruled yellow pad of paper. Truthfully, I can’t recall the object of my affection.

When I submitted my piece to the drama committee (forgetting to include my name on it), I was sure that it was a masterpiece never before penned (Romeo and Juliet notwithstanding). Then I promptly forgot about it, as fourteen-year old girls will. Months later, the play opened, and as I watched, I realized I was listening to my words. Only they weren’t the tragic, tearful outpouring of unrequited love. No, they had been turned into comedy, and darned good comedy too. Rather than being offended, I laughed along with the rest of the audience. It’s hard to take yourself seriously after that.

I worked as a ‘dirt-bag’ for CN Rail for three years. That was the term that we referred to ourselves, a half-dozen young women hired for the summer at CNR’s Danforth yard. Today, the Danforth yard has been replaced by a subdivision. Such is progress. 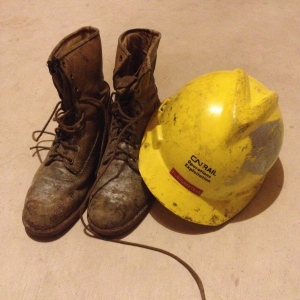 What is a dirt-bag? A jack of all trades, grubby shop helper. The typical uniform: army surplus coveralls (I found one in a flattering shade of dusty burgundy), steel-toed work boots (not shoes—the guys laugh if you try to look stylish), hardhat and goggles. The uniform was not only practical, but it proved to be an excellent strategy to avoid sharing a subway seat. We had a blast doing odd jobs that summer, and being a union job, they paid exceptionally well. My favourite task was assisting a carpenter build a private change room for all the young women the company hired that summer. What can I say? We were paid by the hour, not the job.

My undergraduate specialist was Physical Anthropology at the University of Toronto. I never intended to get into anthropology and had instead enrolled into a life science program. But the University always worried that their science nerds needed to learn how to interact with people, so they required science majors to take humanities electives. Sadly, they never forced the arts majors to take on science subjects, which I never quite understood. Someone should reconsider that position. Don’t get me wrong, I was happy to take on these electives as my brain seems to have an equal affinity for science and art. Over the four years I took Celtic Art and Archaeology, Fine Arts, 17th Century English History (naturally) and of course in my first year, Anthropology. Who knew that I would get hooked? Well, perhaps the person who recommended it knew me better than I knew myself because it’s the perfect balance of science, critical thinking and art. Even though I never worked in the field, I like to think that it has helped me when sifting through history. People are people no matter how many millions of years separate 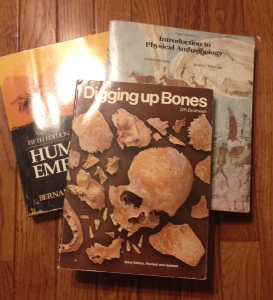 My first art was visual art Painting and drawing were my thing. I loved working with pastels, oils, and conte pencils. For sketching, I usually preferred creating portraits, whereas with oils, it was mainly landscapes. I won a number of awards in high school and even sold some pieces, which is truly an accomplishment for any artist. Following one trip to Gwartzman’s (the place to buy artist supplies in the eighties), on my way to the subway, I found a drunk sleeping on a bench. So I sketched him. Some stranger came by and offered me $15 for it. That paid for my trip to Gwartzman’s.

The very first historical fiction book I read was the Three Musketeers. I probably first watched the 1973 Michael York – Oliver Reed production (which remains the quintessential Musketeers adaptation, IMHO) before reading the book. I don’t remember, but what does stay with me is the thrill of their adventures and wanting to learn how to fence. I’m sure there was a certain amount of furniture jumping at the time. Alexandre Dumas remains as one of my favourite historical fiction authors. I particularly loved how he weaved history with high adventure. 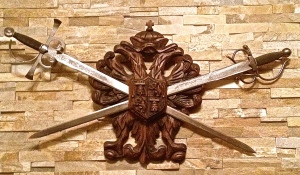 For me, as a child, television was an interactive sport. Now I’m getting down to the darkest, innermost secrets. Sally Moore, this is your fault if someone orders me a straight jacket. But it is confession time and I agreed to it. I never could understand people who sat in front of the TV set and just watched without participating in the story. Perhaps it was the fault of my mother. When she watched her ‘stories’ (aka soap operas), she usually shouted at the actors to tell them what was going on. Only I took it one step further. I became part of the story, or rather, inserted myself as an extra character. What most people don’t know is that the Hardy Boys had a little sister who helped them solve crimes, or that Nancy Drew had another friend, perhaps not as boyish as George, or as plump as Bess, or as adoring as Ned, but one who was instrumental at helping her put the pieces together. Of course, I had to create my own dialogue, but that was part of the fun. To this day, dialogue is one of the elements of story that come naturally to me.

Last but never least, I have been happily married to my husband, Angelo, for 25 years. His support and patience allows me to continue this writer’s journey. Anyone who has been consumed by their writing will attest that it can’t be easy for their significant others. We live in another world, yammer on about people that only we can see and not once do they consider shipping us off to the lunatic asylum. Mine accepts that I’m not always in this world and doesn’t quibble about my habit of collecting an army of half-finished coffee cups on my desk. 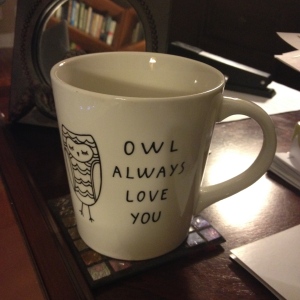 And now for the part where I get to pass the baton to an unwary blogger. I’ve decided to bend the rules a bit and nominate 8 bloggers instead of 15.