When Puritans made sex illegal

On 10 May 1651, Parliament passed “An Act for suppressing the detestable sins of Incest, Adultery and Fornication” which made such acts (forgive the pun) a felony. They made sex outside marriage illegal.

“For the suppressing of the abominable and crying sins of Incest, Adultery and Fornication, wherewith this Land is much defiled, and Almighty God highly displeased” *

But the government did show a little mercy. While the Act was enacted on 10 May, it was to be in effect on 20 June 1651. That was at least thoughtful of the lawmakers to give people fair warning. I can only imagine what was happening in England between 10 May and 20 June.

It’s hard to argue that incest should not be prohibited, and most people would generally agree that adultery is morally unpalatable, but did they need to throw everything out with the rose scented bathwater? Next they’ll be canceling Christmas. Oh, wait…

Let’s examine this law a little more closely. Legal disclaimer: The opinions expressed in this article are the author’s own and do not reflect a studied knowledge of the law. You may proceed.

The definition of incest went beyond kinship by blood to include kinship by marriage, such as son’s wife, wife’s daughter, husband’s father, “and every such Offences are hereby adjudged and declared Incest.”* This definition of incest even extended beyond marriage; for example, following the death of his wife, a widower would be prohibited from marrying his stepdaughter.

The extension of kinship through marriage, and using it as a basis for prohibiting marriage, was not a new thing. Many powerful men in the past had argued consanguinity as a way to divorce their partner. But while this was once used as a convenient way to nullify marriage, the new Act of 1650 made these relationships a felony:

“Every person offending therein, and confessing the same, or being thereof convicted by verdict upon Indictment or Presentment, before any Judge or Justices at the Assize or Sessions of the Peace, shall suffer death…”

Imagine Henry VIII being teleported to 1650. He’d have been between a rock and a hard place: successfully arguing that Katherine was his late brother’s wife to get that divorce, yet admitting to a felony, or altogether giving up Anne and being miserable for the rest of his life.

The penalty for adultery was the same as for incest, namely death, but there were a few exceptions:

As you can see, she didn’t even have to insist that he was dead to be given a pass. What happens in Vegas…

According to the Free Dictionary, the definition of fornication is, “Sexual intercourse between people who are not married to each other, especially when considered as a sin.” This of course leaves me wondering if it’s still considered fornication when someone doesn’t considered unmarried sex a sin. That would of course make it subject to individual judgement. (Curious aside: my initial impulse was to quote from the 2011 edition of Webster’s Canadian for Home School and Office (because I AM), but that word isn’t there! No wonder the world thinks we’re too polite).

Many people assume that premarital sex was taboo in the ‘olden days’ and it was a great scandal if women weren’t virgins when they married. While moralists in every age drummed that in every young person’s head, the reality was otherwise.

In the Stuart Age, contracted couples (promised to one other for marriage) often did not wait until the formal church ceremony. Studies** on parish registers show approximately 20-30% of brides gave birth within the first 8 months of marriage. It was estimated that no more than half of women were still virgins before their wedding night. Clearly this new law had far reaching potential.

The Act called for the following penalty for fornication:

“every such man so offending, and confessing the same, or being thereof convicted by verdict upon Indictment or Presentment, as also every such woman so offending, and confessing the same, or being thereof convict as aforesaid, shall for every such offence be committed to the common Gaol, without Bail or Mainprize [a surety], there to continue for the space of three Moneths; and until he and she respectively shall give security, to be taken by one or more Justice or Justices of the Peace before whom such Confession or Conviction shall be had, to be of the good behavior for the space of one whole year then next ensuing.”

Three month in the gaol for a bit of consensual shagging! This was an abstinence campaign on steroids.

At least it’s not a death penalty, you may be thinking. But gaols of the 17th century were no country clubs. 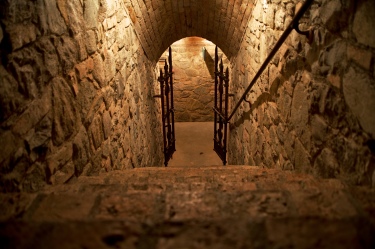 Conditions were appalling, and you had to pay for your keep. If you could afford it, you would have been housed in the posher part of the gaol and be allowed personal items for your comfort. But the gaoler would charge you dear for that privilege. If you couldn’t afford better accommodations, you’d be thrown in the two-penny ward. Rations would be poor, accommodations damp and conducive to gaol fever. Depending on your health going in, three months in the gaol might still amount to a death sentence. And once you were released, you faced a year of parole where you could not reoffend. Grim.

But it got worse. For those judged to be common ‘bawds’, for their first offence they would be:

“openly whipped and set in the Pillory, and there marked with a hot Iron in the forehead with the Letter B and afterwards committed to Prison or the House of Correction, there to work for his or her living for the space of three years”

After they were released from the House of Correction, they had to provide sureties for good behaviour for the rest of their life.

And what happened if you were a repeat offender? Your crime would be elevated to a felony, and it would be punishable by death.

No wonder that when the Protectorate under Cromwell gave way to the Restoration, people were eager to let loose.

**Birth, Marriage & Death: Ritual, Religion, and the Life-Cycle In Tudor and Stuart England, by David Cressy

Nell Gwyn engraving: By Thomas Wright – published 1851 in Beauties of the Court of Charles the Second, Public Domain, https://commons.wikimedia.org/w/index.php?curid=798741