Writing Historical Fiction: Make Sure You Write the Right Thing

I had the pleasure of getting to know E.M Powell, initially when she was one of the co-editors of the English Historical Fiction Authors blog, and continuing through our work on the HNS Social Media Team for the Historical Novelist Society. She is a bestselling author of medieval historical thrillers and has always been very generous with her time and encouragement of other writers.

I first approached E.M Powell to participate in a genre discussion about how historical fiction and historical romance often co-mingle in works not typically considered romantic. The result is this wonderful guest post about understanding one’s genre, invaluable advice for all writers!

Writing Historical Fiction: Make Sure You Write the Right Thing, by E.M Powell

When Cryssa asked first asked me if I’d like to be interviewed on her blog, my answer was of course a resounding ‘yes.’ It’s always a compliment to be approached by a fellow historical fiction author who’s willing to share their blog space, and especially so when it’s a committed professional like her.

She sent me some carefully crafted questions, among them being some about writing my first novel, The Fifth Knight. That book was published back in late 2012 and was the start of my career as an author, one for which I am profoundly and eternally grateful to the Writing Gods. It came as no surprise at all that Cryssa’s questions were relevant and thoughtful.

But what was unexpected was how much they made me think about my journey to publication. They also made me reflect on the lessons I’ve learned along the way, lessons which, had I learned them earlier, my path might have been that bit straighter—and shorter. So in the spirit of writerly cooperation and support, I thought I’d share them here. I thought of a number of grandiose titles for this post but settled on one which is pretty straightforward: ‘Writing Historical Fiction: Make Sure You Write the Right Thing ’.

Now, for those of you who haven’t heard of it, Cryssa summed up the premise of The Fifth Knight beautifully: ‘The Fifth Knight is a historical thriller with a romantic subplot that deals with the murder of Thomas Becket. Powell’s hero and heroine are at the wrong place at the right time and they are thrown into a race for their lives.’ She has, in fact, managed to pitch my book far more effectively than I ever did, of which more later.

It’s a book that has appealed to readers. To date, it has sold over 90,000 copies as well as many thousands more in its German translation as Der fünfte Ritter. It may seem that this post should be more suitably titled ‘The Many Books I Have Sold & How It Was A Breeze’.

I can assure you it most certainly was not. Because nobody wanted The Fifth Knight, at least not in its earlier versions. I initially wrote it as a historical (medieval) romance.  I had had some Romance Writers of America (RWA) contest wins and agent near-misses with a previous medieval romance, so I thought romance was my forte. I thought all I had to do was write historical romance better. This new story, focused on the relationship between my titular hero, Sir Benedict Palmer, and my heroine, the religious, conflicted Theodosia would be the one to get me into the published world.

Again, it did well in contests. Again, I got a lot of interest from agents. But ultimately, nobody wanted it. Nobody. I have hundreds of rejections and while many of those said my writing was good, and some said it was excellent, it boiled down to the same thing: it wasn’t quite hitting the right market. Or, more precisely, it wasn’t hitting the particular market that is historical romance. One agent said it was straddling the line between historical romance and other genres.

I was somewhat perplexed. This was absolutely a romance, wasn’t it? Never mind that I had a blast writing the action scenes and took a lot of questionable joy in finding creative ways to off the bad guys. The relationship between Benedict and Theodosia was front and centre.

Then I received feedback from the New Writers Scheme run by the Romantic Novelists’ Association (RNA) in the UK, to which I had submitted The Fifth Knight. (A quick pause here to give huge congratulations to Cryssa. Not only was she accepted onto the scheme, she’s now been shortlisted for its prestigious Joan Hessayon Award for new writers for Traitor’s Knot!)

I got my feedback from the NWS and was delighted with the many positives in there. Yet the answer was still a ‘no’: I was not going to be accepted onto the NWS. But that report held feedback that with hindsight is practically written in flashing lights. And that feedback was‘it’s more about the chase, the kind of plot beloved of thriller writers.’  Did I pick up on that? Did I heck.

When I entered the novel in the RWA’s Golden Heart contest for unpublished writers, I didn’t final. I got some great scores. But one judge had firmly ticked the ‘Not a Romance’ box. Of course, that judge was correct. Could I see that? Nope. I sulked for days.

By now, there will be readers of this blog post shouting at their screens over my lack of self-awareness. I was in two minds about mentioning the TBR pile on my Kindle and elsewhere. For laughs, I will. Would it surprise anybody to read that yes, while it had a fair share of romantic suspense, it consisted mostly of crime, mystery and thriller novels? No. Of course it wouldn’t.

The penny finally, finally dropped for me in 2011. The novel won the unpublished Daphne du Maurier Award for Excellence in Mystery/Suspense. The Daphne is a writing contest, run by RWA’s Kiss of Death Chapter ‘for published and unpublished authors of romantic suspense, mystery, suspense, and thrillers with romantic subplots and mainstream mystery, suspense and thrillers.’What’s more, The Fifth Knight won the unpublished Mainstream mystery/suspense category, defined as ‘any manuscript where the mystery/suspense is the main plot’. What’s more, an editor from a major publishing house, having read the first three chapters, requested the full manuscript.

To say I was excited didn’t even come close to my response. I started to read through the manuscript again, to make sure it was the best it could be before I sent it. And then it hit me. I’d been writing it the wrong way round. So much of the novel was romance with thriller and mystery elements when it should have been, as Cryssa described it to me, ‘a story which includes a romantic thread in what is essentially a mystery-thriller.’

I spent almost five months rewriting it and ruthlessly deleting entire chapters. Contest-winning love scenes between Benedict and Theodosia went out. It became a lot darker, for I was now writing a thriller. Then I sent it to the major editor, who never replied. I was disappointed, but not bitterly so. For now I knew what I had written and, more importantly, I had loved reshaping it.

Within another few weeks, I had three agents competing to represent me. The peerless Josh Getzler won. I’m sure it will come as no surprise to hear that he loves to represent mysteries, but especially historical ones. It is he who coined the unforgettable phrase that I write ‘car chases with chain mail’.

The Fifth Knight found a publisher with Thomas & Mercer, the crime/thriller/mystery imprint of Amazon Publishing. That was a full ten years after I had first written a novel. Amazingly for me, Thomas & Mercer also published the next two books in the series, The Blood of the Fifth Knight and The Lord of Ireland. While the books still featured Sir Benedict Palmer as the hero and contained some romantic elements, they were secondary to the main plots of mystery, suspense and thriller.

And now I have a new historical crime series coming out from the same publisher. The Stanton & Barling mysteries are set in the same 12thCentury world. Aelred Barling, a cynical middle-aged clerk at the court of Henry II, is a stickler for the rules. Hugo Stanton, his amiable young assistant, is a disgraced royal messenger with an uncommon talent for rooting out the truth. They live in an age of violent murder and swift revenge, but together they are tasked with imposing the King’s law on an unruly populace—even when it means putting their own lives on the line.

I’m writing stories about ruthless judgements, brutal punishments…and bloody murder. I couldn’t be happier. Because now, I’m writing the right thing. The right thing for me.

Reader, if you do nothing else: write the right thing for you, too. 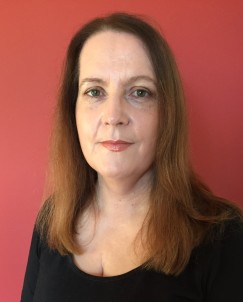 E.M. Powell’s historical thriller Fifth Knight novels have been #1 Amazon and Bild bestsellers. Her new Stanton & Barling medieval murder mystery series starts with THE KING’S JUSTICE, which is due for release in 2018. She is a contributing editor to International Thriller Writers The Big Thrill magazine, blogs for English Historical Fiction Authors and is the social media manager for the Historical Novel Society.

Born and raised in the Republic of Ireland into the family of Michael Collins (the legendary revolutionary and founder of the Irish Free State), she now lives in northwest England with her husband, daughter and a Facebook-friendly dog.

The King’s Justice is now available for pre-order through Amazon and will be released June 1, 2018. Purchase your copy HERE.

The Fifth Knight is available through Amazon. Purchase your copy HERE.