A 17th century sugar plantation in the Caribbean #Barbados

I’ve been quiet on the blogging front as I’ve been writing a new novel that continues on the next leg of the journey on the road to the Restoration. The Severed Knot picks up on the fate of the Scottish prisoners (at least one in particular) following the Battle of Worcester and how they were transported to Barbados as indentured servants.

I find that starting a new novel can be both exhilarating and nerve wracking as I wrestle with my Muse to get the story down. One of the most enjoyable aspects of starting a new historical fiction novel is . . . you guessed it, research! Oh the joys of digging into a new topic and chasing down a warren of rabbit holes. Over the next few months, I’ll be sharing with you what I’ve uncovered. Also stay tuned for cover reveals and first chapter previews.

Today, we head to Caribbean island of Barbados! Long before Barbados became a travellers’ destination, renowned for its beautiful beaches, the island was a lucrative English colony and a source of exotic commodities, particularly sugar.

Barbados had been first colonized in 1627 by London merchants, and by approximately the mid 1640’s, the island’s plantation owners had started growing sugar cane. For the next three centuries, Barbados would become one of the major sugar producers in the world. Even today, when driving around inland Barbados, acres of sugar cane fields are a common sight.

Leading to the Third English Civil War, Parliament declared war on Scotland shortly after Scotland proclaimed Charles II King of Great Britain, France and Ireland. Under the leadership of Oliver Cromwell, England invaded Scotland and won a stunning victory against the defending Scots at Dunbar in September 3, 1650. This resulted in more prisoners than they knew what to do with (or could keep), and their cruel solution was to transport them to the colonies, to be sold as indentured servants. Many ended up in Barbados working the sugar fields, where they had an acute need for as many labourers as they could get.

A year later to the day, Oliver Cromwell won another decisive victory against Charles II at Worcester, and once again, had more prisoners than he could keep. Transportation had worked out for Parliament with the Dunbar prisoners (not so much for the Scottish prisoners!), so Parliament applied the same solution to the prisoners from Worcester. Many were shipped to the Saugus Iron Works in Massachusetts, but an unknown number were shipped to Barbados to be indentured to plantation owners. Today, their descendants are still there, adding to the rich culture of Barbados.

One of the oldest surviving sugar plantations on the island is St. Nicholas Abbey, which also has the distinction of being one of three remaining Jacobean mansions in the Western Hemisphere. A visit to St. Nicholas satisfies those interested in the island’s history, Jacobean architecture and life on a sugar plantation. I loved my visit there and I could imagine how characters would have moved around in the house, the courtyard and the fields.

A tale of many families

St. Nicholas Abbey is located to the north of the island in St. Peter’s Parish, and the mansion was built in 1658 by Colonel Benjamin Berringer. With its 400 acres of prime land, at least half devoted to sugar cane, and its proximity to the main shipping port of Speightstown (once called Little Bristol), the plantation was indeed a jewel. As you drive up to the mansion, you pass under a shaded roadway lined on either side with mature mahogany trees. Those trees would have been planted in the 19th century, but when the house was first built, this roadway would have been graced by cherry trees.

Originally, St. Nicholas Abbey was part of a collective property owned by Colonel Berringer and his business partner, John Yeamans (whose own portion was called Greenland). Over the years, the two men would engage in a heated rivalry over the property, and more scandalously, the affections of Berringer’s wife, Margaret.

In the early days of their partnership, Berringer and Yeamans competed for the favours of Margaret Foster, a preacher’s daughter. Berringer came up as the winner in that contest, and he and Margaret married and settled down to have three children. Yeamans, no doubt, stewed. It’s very likely that the subsequent and ongoing disputes about the plantation borders were spurred by losing out on Margaret’s affections.

As these things often happen between married couples, Berringer and his wife’s marriage had its ups and downs, and in 1661, the couple had a major argument which forced Berringer to leave the home and remove to nearby Speightstown to stay with friends. The cause of the argument is unknown, but he and Margaret did not have time to reconcile. Not long after his departure, Berringer died suddenly and under very mysterious circumstances. Many whispered that Yeamans had somehow poisoned his old business partner, and these rumours dogged Yeamans for the rest of his life. Whether Yeamans did poison Berringer or not, no one could say nor was any proof established, but everyone noted the speed to which he and Berringer’s widow, Margaret, were married—her mourning lasted only ten weeks. Not only did Yeamans profit romantically by his former business partner’s death, he came out significantly ahead financially. Upon his marriage to Margaret, Yeamans acquired the Berringer plantation and merged both properties under the new Yeamans Plantation appellation.

John Yeamans’s star was now on the ascent. A couple of years after Berringer’s death, Yeamans was awarded a peerage by King Charles II and appointed Governor of Carolina, and he and Margaret eventually relocated to Charlestown. The man was reputed to be a greedy opportunist, and his reputation soon soured his dealings in the new world. He eventually moved back to Barbados with his wife and died in 1674.

St. Nicholas Abbey eventually passed to Margaret’s son from her first marriage and then shortly to his daughter Susanna Nicholas. This was when the plantation changed from Yeamans to its present day name.

Eventually the plantation would change hands in 1720 when Joseph Dottin, the Deputy Governor of Barbados purchased it. In 1746, he gave the property to his daughter as a dowry, with the provision that it would revert back to her heirs, when she married Sir John Gay Alleyne (he was the Gay Alleyne connected to the famous Mount Gay rum). Sir John was a Speaker of the House and one of the first plantation owners to have educated his slaves. Unfortunately when Sir John’s wife passed away, there were no heirs and St. Nicholas was in a state of legal limbo. The plantation eventually grew deep into debt and had to be sold off.

Enter the Cumberbatch family. If you’re wondering if there’s a connection to that Cumberbatch, yes, there is indeed. Meet Benedict’s 7 x great-grandfather (give or take). The resemblance is uncanny.

Two brothers, Edward Cumberbatch and Lawrence Trent Cumberbatch purchased St. Nicholas Abbey in 1810 and through the Trent Cave branch owned the property until 2006. The property was sold one last time to architect Larry Warren, who restored the home to its former glory and opened it to the public.

Come with me on a virtual tour of the mansion. When you walk up to the house, you will pass an old stone wall and gate which leads to a forecourt, filled with local plants and flowers. The front of the three storied mansion features three Jacobean curvilinear gables set above an arched entranceway. When you enter the short hallway, to your right is the formal dining room. In the 17th century, the kitchen would have been a separate building accessible off the dining room, but in recent years, the kitchen was connected to the main house through this route. Of note in this room is an English Sheraton sideboard that dates to the late 18th century and a mahogany dining table crafted from local wood. The Minton china dates back to the early 19th century.

To the left of the hallway is a grand drawing room with sash windows, which were installed in 1746, and which replaced the original shutters. These windows overlook a herb garden (with bay leaf, lemon grass, and aloe) and expose the room to refreshing tropical breezes. One amusing aspect of the house was that there were fireplaces built into the design. I don’t think a chimney sweep’s services have ever been needed. 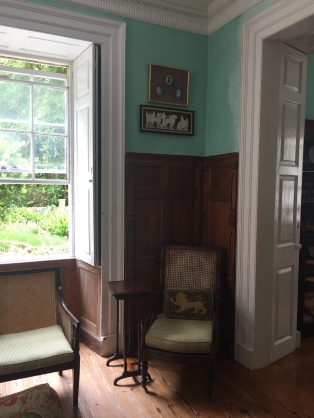 Just off the drawing room you will find a private study and in it, a unique gentleman’s chair. Consider it a modern day equivalent of a La-Z-boy recliner. The master of the house could read, eat, sleep, and when his snoring grew too loud, be wheeled around to another room, all without having to vacate the chair!

Upstairs there are seven bedrooms, accessible by a Chippendale staircase which dates back to the early 18th century. When the staircase was installed, it didn’t just replace the original staircase, it was moved over from the left to the right.

Moving toward the back of the house you’ll find a 17th century English Oak Settle in the Jacobean style. A closer look at the settle will show the upper panels depicting various knights.

From there we exit into the courtyard with a very large (and thorny) tree stands. This tree is believed to be nearly as old as the house, and locals call it a “monkey-no-climb tree” because the monkeys sensibly stay clear of it. There are a number of outhouses positioned in the courtyard including a bathhouse on one end and a barn at the other end. 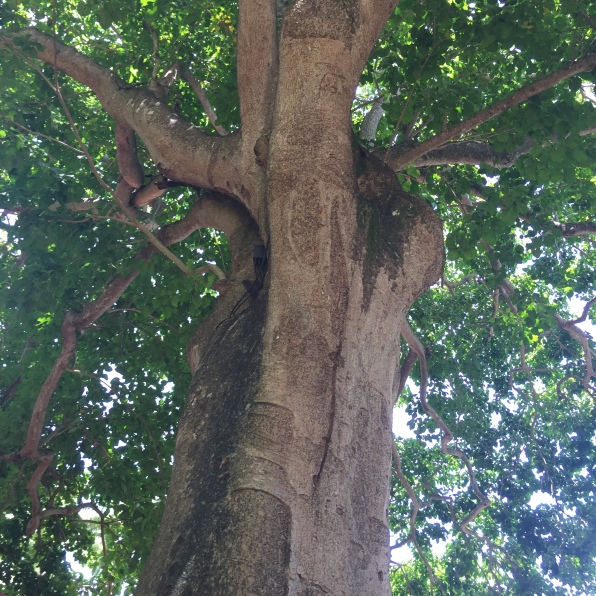 Sugar and rum and all things yum

St. Nicholas enjoyed continuous sugar production from the 17th century until 1947. After a sixty year break, it resumed again in 2006. Today St. Nicholas crushes 350 tonnes of cane each year. The plantation crushes the cane on site between January to June using steam powered rollers which were introduced in 1890. Before then, the crushing rollers would have been wind powered. You still see these windmill structures throughout the island.

Traditionally, the cane was cut by hand (a foot off the ground), stacked vertically in a wagon and taken to the crushing mill. Time was of the essence in harvesting the canes, for they had to be crushed by the end of the day or dry out. By stacking the cane vertically, instead of been laid flat on the bottom of the wagon, they’re quickly offloaded at the crushing mill.

Basic sugar production includes extracting the muddy brown cane juice, passing it through a series of copper pots in the boiling house and then curing it in clay pots. The coarse, brown sugar takes about a month to cure, while the refined white sugar takes a few more months longer.

For rum, they distill the skimmings which run from the three lesser coppers in the boiling house to another building called the still house. From there the resulting liquor would need to be distilled twice and aged. Today, visitors can try the St. Nicholas plantation rum and be a part of the island tradition.

If you’re ever in Barbados and look for a unique experience and a trip back in time, I recommend a visit to St. Nicholas Abbey.

This post was re-worked from an article written for the English Historical Fiction Authors blog.

Note: Since this article was posted, Severed Knot has been published. Set in 17th century Barbados, the story follows a Scottish POW and an Irish woman who are both pressed into indentured servitude.