The Provenance of a Book

A friend and fellow writer, Gwen Tuinman, recently gave me a book she’d knew I’d enjoy: The Proverbs of Scotland, by Alexander Hislop. It’s a well-read old book, worn at the spine and a bit chewed at the top, but just the right size to fit in your hand. And it has lovely Scottish proverbs rich in language and personality. No matter that you can probably find these sayings on the internet, they seem to carry more weight nestled on yellowed paper.

After initially poring over the proverbs–there’s even a glossary of Scottish words (how convenient!)–I became curious to know how old the book was. Historical minds want to know. I’m sure there’s a fitting proverb about age and wisdom in there somewhere, but a date of publication? Not so clear.

Clue #1: The book was clearly printed for a library. Forbes Library was engraved on the lower spine cover, and there was a name plate on the front endpaper. There was also a curious punch stamping on the title page and a couple of interior leafs.

The details: Forbes Library, Northampton, Massachusetts. I have an American book. But is it? 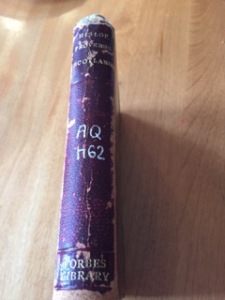 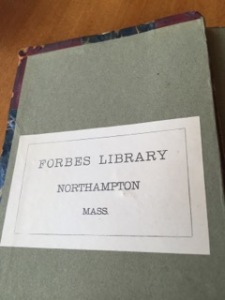 Clue #2: The title page shows that it was published in Edinburgh, Scotland and that it’s a third edition, “Entirely revised and supplemented.” So when was the first edition published? There’s a “New” edition uploaded to the Open Library archives  which shows a date of 1868. {You were expecting the 17th century, weren’t you?}. But my version doesn’t have a date, and it’s missing a quote from Don Quixote:

“I am of opinion, Sancho,” said Don Quixote, “that there is no proverb which is not true, because they are all sentences drawn from experience itself, the mother of all sciences.”

Excellent quote. I rather wish mine wasn’t missing it. I’m having proverb envy.

Clue #3: The preface is identical in both books, with the text lining up perfectly between the two versions. This shows that there was very little or no font/printing changes made between editions. The only exception is that the Open Library (first) edition has a date of May 1863 printed at the end of the preface.

But on the first page of my preface, someone has stamped in the inner margin, MAR 7 1895. We have something. People tend to record the current date without exception–notwithstanding the common mistake of writing the previous year during the month of January. So I’m reasonably certain that the book was originally handled around 1895, meaning that it had to have been printed sometime between 1868 and 1895.

Now I’m curious about the Forbes Library of Northampton, Massachusetts. Ironically, it bears the same name as the Earls of Northampton, Spencer Compton and his heir James, both staunch Royalists and supporters of King Charles I.

You were wondering when I’d get to the 17th century!  (Shameless blog plug: if you missed my post on the Loyal Comptons, click here).

The Forbes Library is the Northampton, MA, public library, also known (after 1920) as the Calvin Coolidge Presidential Library and Museum. According to their website, the library was built in 1894.

The first director of the Forbes was Charles Ammi Cutter, who created a system of cataloguing known as the Cutter system. Many considered this method one of the most logical systems for classification and ahead of the Dewey Decimal system in that respect.

A year before the library opening, Cutter and his staff, consisting of “five untrained young women assistants, a few high school and Smith College students, and one janitor,” organized the 3,000 books that Cutter had purchased from Europe for the library. The task of cataloguing and sorting the books was so great, that the library was forced to delay their opening until July 1865 instead of January 1st.

And note the date of my wee book, which was clearly in the original stock purchased by Charles Ammi Cutter, and  stamped by someone in his staff–possibly one of the untrained young women, or the Smith College students or even the janitor. But considering that the opening was delayed and all hands were likely on deck, there’s a very good chance that Charles Cutter stamped it himself.

I’m fascinated by the provenance of my wee book, and I can’t help but wonder how it got all the way here to Canada. Did someone buy the book after it was too worn to be in the lending system and who could that have been? Did the purchaser move to Canada or was it sent to a friend or a relative already living here? Imagine the journey of this book. Published in Scotland, shipped to America only to find its way to Canada.

Thank you, Gwen for the thoughtful gift.