On 8 April 1644, Parliament got into a snit over the maypole. They determined that they had enough of it and released An Ordinance (for the better observation of the Lord’s Day) to ban it, calling the maypole a “Heathenish vanity, generally abused to superstition and wickedness”. The Puritans were looking to reshape England into a godly society, and the poor, innocent maypole just had to go.

That all and singular May-Poles, that are, or shall be erected, shall be taken down and removed by the Constables, Borsholders, Tything-men, petty Constables, and Churchwardens of the Parishes, and places where the same be.

It wasn’t enough that it had to be taken down, but they were very specific that everyone had to get into the action. If you’re thinking that they left out a loop hole, they also added for good measure,

And that no May-Pole shall be hereafter set up, erected, or suffered to be within this Kingdome of England, or Dominion of Wales.

That was pretty harsh.

Since they were fast approaching the next May festival, there was a bit of urgency to this business. It wouldn’t have served their purposes for people to stand around, shrug at the Ordinance and say, “Yea, we’ll do it sometime after May Day.” No. Immediate action was prescribed, and it came with a fine for non-compliance. The forfeiture for neglect was:

If any of the said Officers shall neglect to do their Office in the Premisses, within one week after the notice of this Ordinance, every of them, for such neglect shall forfeit Five shillings of lawfull Moneys; and so from week to week, weekly Five shillings more afterwards, till the said MayPole shall be taken down, and removed.

Assuming that they wanted to keep the maypole in place for May Day, being 3 weeks after the Ordinance was posted, this would have cost them 15 shillings for a bit of traditional fun. According to Daily Life in Stuart England, one shilling was the average day’s wage of a labourer. It may not have broken the parish bank having to cough up the equivalent of 2 weeks of wages as a fine, but this was the middle of a war and every shilling was dear. Which was a shame, given that the maypole was an innocent bystander in this argument.

But the Ordinance didn’t stop at the May Pole. Why should it? It’s not like they had other things to occupy themselves during this time, like for instance, the English Civil War which was in full swing.

The Ordinance also banned the following leisure activities on the Lord’s Day:

That no person or persons shall hereafter upon the Lords-day, use, exercise, keep, maintain, or be present at any wrastlings, Shooting, Bowling, Ringing of Bells for Pleasure or Pastime, Masque, Wake, otherwise called Feasts, Church-Ale, Dancing, Games, Sport or Pastime whatsoever; upon pain, That every person so offending, being above the age of fourteen years, shall lose, and forfeit five shillings for every such offence.

At least the children were excluded from having to shell out 5 shillings for sports and ‘wrastling’. Oh, but wait, not so fast. Parliament had something for the kiddies too.

And be it further Ordained, That all and singular person and persons, that have the care, government, tuition or education of any childe or children, under, or within the age of fourteen years shall forfeit and lose twelve pence for every of the said offence that shall be committed by any such childe and children.

Seriously. They should have started calling Parliament Burgermeister Meisterburger. Finally, at the time of the Restoration, the Merry Monarch, King Charles II, also restored the poor, unfortunate maypole once more in the village greens where to this day, people still celebrate.

On this day, I wish you all Happy May Day, and you’re welcome to keep your shilling. 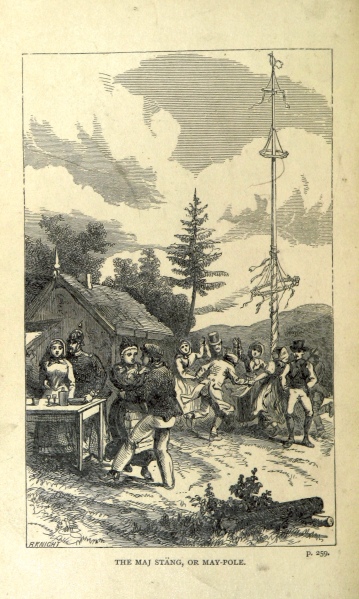